Sweep Frequency Response Analysis, SFRA, is one of the most advanced electrical tests that is available for preventive maintenance, and can be utilized to detect an array of problems in transformers (both oil-filled and dry type), as well as other electrical machines such as motors and generators. It is one of the hot-topics in electrical-machinery fault analysis today.

The test is so novel, that there are still methods and standards formulated for it today. Therefore it is worthwhile to review this test, the array of faults it is capable of detecting and the standards that are available to test to today.

We can describe any electrical device as a distributed network of resistors, capacitors and inductors, commonly called an RLC network 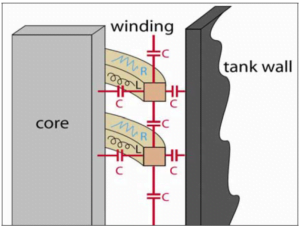 Every RLC network has a frequency response, meaning when we inject a sinusoidal (AC) voltage at a certain frequency, a response to that specific frequency is a change in the output amplitude and phase. That change depends on the specific values of the RLC network.

If we vary the response across a range of frequencies, we will get a graph that’s called the Sweep-Frequency-Response (SFR). That graph is unique to that particular RLC network and can be viewed as a ‘fingerprint’ of the RLC network. The more distributed the network, the more unique the fingerprint.

Any deviation resulting from a mechanical or electrical change in (our case) the transformer, will affect the SFR and will be manifested as a change from the fingerprint SFR. The larger the change, the larger the mechanical/electrical deviation.

An analysis of these changes in SFR is called a Sweep-Frequency-Response-Analysis – SFRA.

The picture below summarizes the principles behind SFRA. Mouse over to zoom. 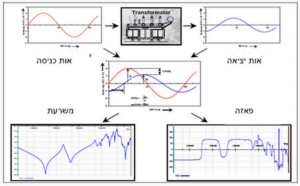 Failures that can be analyzed using SFRA

SFRA analysis is usually based on taking a fingerprint response and checking a later SFR graph to the fingerprint. However, it is not limited to that:

Types of faults detectable by SFRA:

To summarize, SFRA is an advanced tool in the arsenal of troubleshooting problems in transformers and other electrical machines.